Once he met him at Rashtrapati Bhavan, New Delhi to convey about his idea of opening the India’s first Seashell Museum at Mamallapuram.

DR. A.P.J Abdul Kalam was very happy about the idea and appreciates the passion and dedication of the founder K. Raja Mohamed towards collecting the seashells for over 33+ years, With this inspiration later in the year 2013 Mr. Raja Mohamed opened the India’s first Seashell Museum in the name of India Seashell Museum in Mamallapuram and informed it to Dr. A.P.J Abdul Kalam, he was very happy and congratulated him for his achievement.

Devoting 40 years of his life and his hard-earned money to this zeal has brought him unprecedented fame and recognition. There was a glow of eternal happiness in his eyes as he stated, "With the financial support of my maternal uncle, I have been successful in accumulating Seashells from small to large and from the ordinary to the exotic. My collection is from all parts of the world. I had to part with plots of family land to make long-held dream a reality. That established an exclusive Seashell Museum.“ 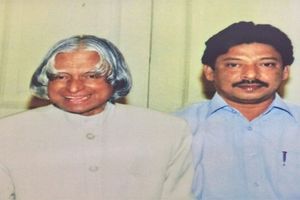